The lessons will take place on the following days:

The participants who have followed at least 70% of the lessons will receive a certificate, after delivering a project work on one of the topics covered by the course. 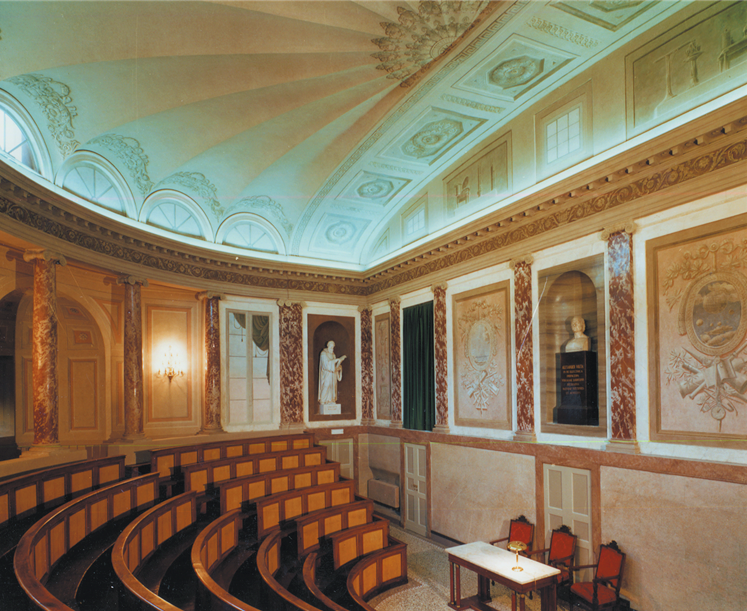 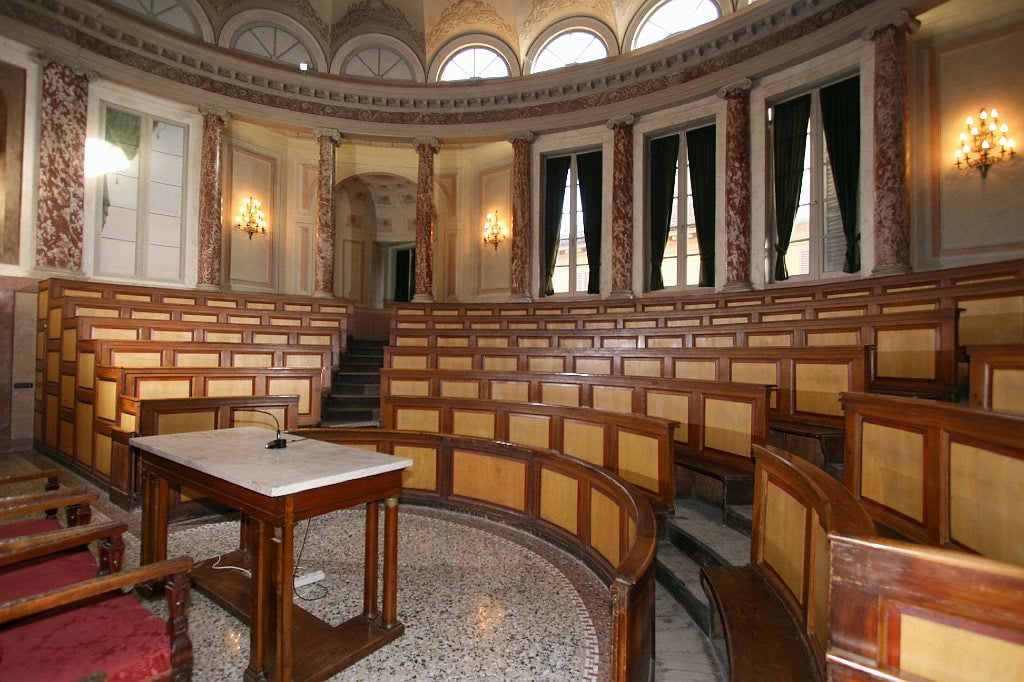 The holding of lectures open to the public, in which the theory was accompanied by experiments (the most interesting) was explicitly provided for in the renewal plan of the University wanted by Maria Theresa. To welcome the large audience that attended the lessons of Volta, Joseph II, in 1785 ordered the construction of a new classroom for Physics to be located on the east side of the Theological Portico. The works were entrusted to the architect Leopoldo Pollack, who completed them in 1787. The classroom repeats the scheme of palladio’s Teatro Olimpico in Vicenza, with which it presents both structural and decorative similarities. The motif of the niches with statues also constitutes a clear quotation from Palladio. Having damaged the original flat ceiling, the architect Marchesi replaced it, after 1828, with the current shell roof.

Behind the chair is the bust of Volta, the work of the sculptor Giuseppe Comolli (XIX century). on the pedestal is engraved the epigraph dictated by abbot Pietro Configliacchi. On the wall above the sculpture are depicted the most important scientific instruments invented by Volta. In particular, on the left side, you can see an electrophore, a flammable gas gun, a eudiometer and an apparatus for measuring the isobaric expansion of gases; on the right side, instead, a presentation of some experiments with frogs and a battery connected with a capacitor electroscope. 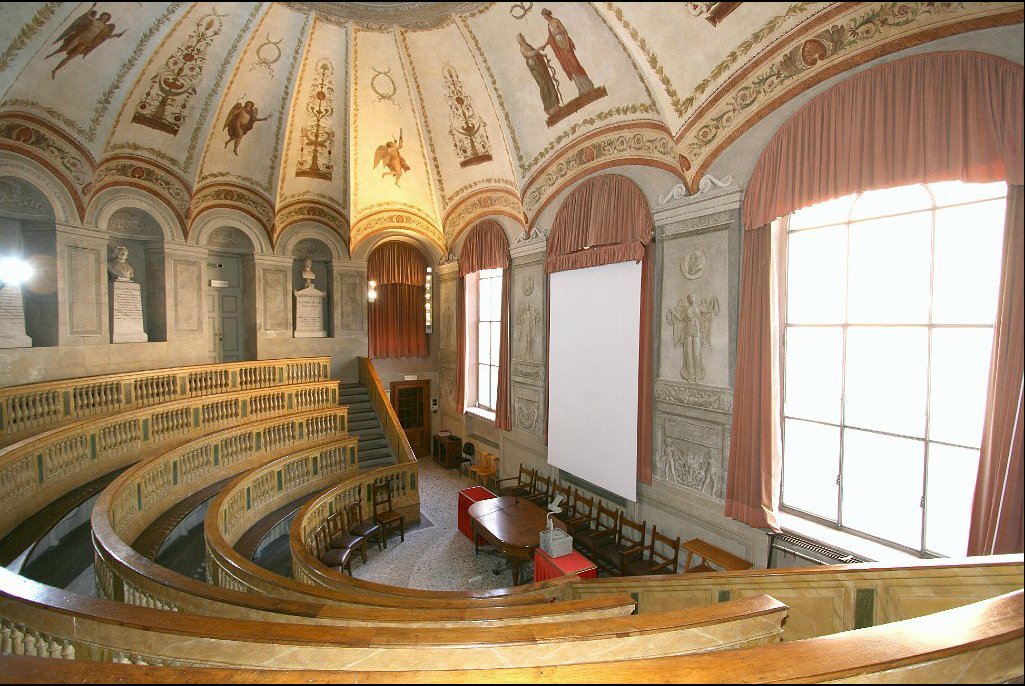 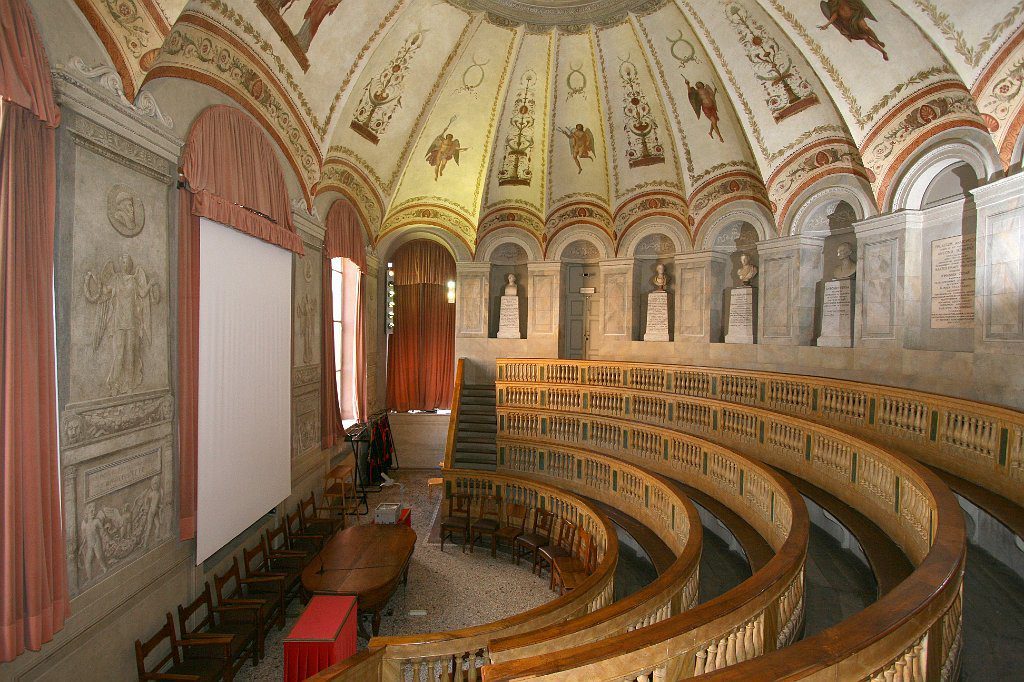 Since the 16th century, the university had an anatomical theater, however, with the arrival of Antonio Scarpa in 1783, who wanted to transform the Pavia anatomical school into one of the best in Europe, it became necessary to create a new theater, more suited to the new approaches to research and teaching.

The project of the anatomical theater was initially entrusted to Giuseppe Piermarini, but the proposed elaborate did not like the emperor Joseph II, who financed the work, nor the professors of the university and therefore Leopoldo Pollack was commissioned, who took advantage of the consultancy by Antonio Scarpa, to prepare a new project that was to resemble, according to the indications of Chancellor Wenzel Anton von Kaunitz-Rietberg, the anatomical theater recently built in the Military Surgical School of Vienna, directed by Giovanni Alessandro Brambilla from Pavia.

Work began in 1785 and the hall was finished in 1786. Currently the hall is used for conferences and congresses.